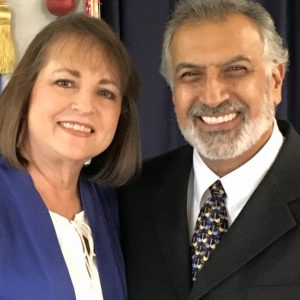 Rabbi Amnon and Rebbetzin Lynette Shor are international conference speakers on prophetic subjects, the Middle East conflict, Biblical holidays, and Jewish cultural life. Rabbi Shor has appeared on many radio and television programs which include CBS, CBN, TBN, and Jewish Voice. He has also worked with Promise Keepers as the international liaison to Israel and the Middle East, and with the Road to Jerusalem Ministry as global spokesman.

Rabbi Amnon Shor, D.Min., was born in Israel to an orthodox Jewish family. His grandfather Zachariah was a Rabbi in the local synagogue. Rabbi Shor learned the Old Testament and the Jewish Law from early childhood. After his service in the Israeli Army, where he fought the Egyptian Army in the 1973 Yom Kippur War, he set out to see the world and ended up in the U.S. where he met his wife of 39 years Lynette.  They have three children and six grandchildren.

Bet Shalom Messianic Congregation is dedicated to sharing the Good News of God’s salvation through Israel’s Messiah, Yeshua (Jesus), from within a Jewish biblical, cultural and traditional context. The vision is to love and worship the God of Israel as a caring community, proclaiming Yeshua as Lord and Messiah to Jews and Gentiles by:

Bet Shalom is a member congregation of the IAMCS − International Alliance of Messianic Congregations and Synagogues and affiliated with the MJAA − Messianic Jewish Alliance of America.

To provide a place of learning, worship and congregational life for Jew and Gentile within the context of Biblical Messianic Judaism; to bring together Jews and Gentiles who have a shared vision for Jewish revival and to introduce our Jewish brothers and sisters to the promised Jewish Messiah, Yeshua.