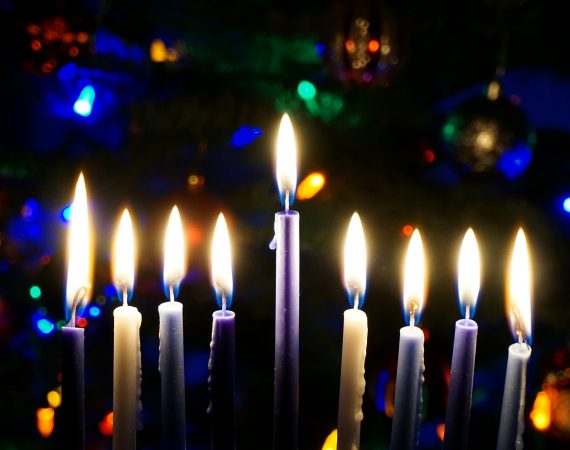 How did it all begin?

Hanukkah is a festival that commemorates the purification and rededication of the Temple by Yehuda Ha’Maccabee (Judah Maccabeus) on Kislev 25, 165 BC (usually in December). Three years prior, Antiochus IV, the Seleucid (Syrian) king, defiled the Temple by erecting an idol to Baal Shamen (Zeus), sacrificing a pig on the altar and proclaiming himself to be a god. He called himself “Theus Epiphanes” meaning “the god manifest.” He also decreed that The Torah could not be studied, and whoever violated this decree would be subject to the penalty of death. Circumcision and the keeping of Shabbat was also forbidden.

Antiochus sent troops from village to village with a statue of himself ordering people to bow down to it. One day they arrived in the village of Modi’in. An elderly man stepped forward to comply with the order, but an observant priest, Mattityahu of the Hashmonai family, thrust him through with a spear and also killed one of the Seleucid soldiers. Thus began the Maccabee’s revolt. Mattityahu, his five sons and others fled into the Gophna Hills and conducted a guerrilla war against the Seleucids for three years. Finally, Jerusalem was liberated, yet the Temple was defiled. The account of this revolt is found in the historical books that include I Maccabees 1 and 4 and II Maccabees 6 and 10.

The Rabbis recount the miracle of Hanukkah in these terms: “On the 25th day in the month of Kislev, the eight days of Hanukkah begin. When the Greeks entered the Temple Sanctuary, they contaminated all the purified oil for lighting the Temple Menorah. When the Hashmonaim were victorious in defeating the Greeks, they searched and found only one cruse of oil bearing the High Priest’s seal. This container had enough oil for only one day’s supply, but miraculously the small amount of oil lasted eight days, while new oil was being prepared. The following year, these days were declared a holiday to be celebrated with the saying of Hallel (Psalms 113 – 118) and thanksgiving prayers.” This is the reason the Jewish people light a nine branch Menorah during Hanukkah.

Now it was the Feast of Hanukkah (Dedication) in Jerusalem, and it was winter. And Yeshua walked in the temple, in Solomon’s porch. Then the Jews surrounded Him and said to Him, “How long do You keep us in doubt? If You are the Messiah, tell us plainly.”

Yeshua answered them, “I told you, and you do not believe. The works that I do in My Father’s name, they bear witness of Me. But you do not believe, because you are not of My sheep, as I said to you. My sheep hear My voice, and I know them, and they follow Me. And I give them eternal life, and they shall never perish; neither shall anyone snatch them out of My hand. My Father, who has given them to Me, is greater than all; and no one is able to snatch them out of My Father’s hand. I and My Father are one.”

Hanukkah’s theme is about a miracle. During Hanukkah Yeshua spoke of His miracles: “If I do not do the works of My Father, do not believe Me; but if I do, though you do not believe Me, believe the works, that you may know and believe that the Father is in Me, and I in Him.” (John 10:37-38). Yeshua wanted the people of His day to see His miracles and believe in Him as a result. His miracles point to His divine and Messianic identity. In this way Yeshua personifies the message of Hanukkah: God is actively involved in the affairs of His people. Hanukkah reminds us that God is a God of miracles, not limited by concept and religious ideals. He has purposely entered into human history and continues to do so today. All of us who know Yeshua can speak of God’s miraculous works in our lives.

Yeshua is the Light of the World

The story of Hanukkah can be compared with the end-time events described in the books of Revelation and Daniel. Antiochus is a type of the anti-messiah. Just as happened under the rule of Antiochus, Daniel prophesied in 9:27 “Then he shall confirm a covenant with many for one week; but in the middle of the week he shall bring an end to sacrifice and offering. And on the wing of abominations shall be one who makes desolate, even until the consummation, which is determined, is poured out on the desolate.” The same spirit promoted by Antiochus is in the world today. Worldwide immorality and idolatry are commonplace in every culture.

Lighting of the Candles

Each family is to place its Hanukkah Menorah, so that it is visible to the outside, whether in a window or in a special place near a door. So, Yeshua tells us not to light our candle and put it under a bushel. We should put it on a Menorah and let it shine as a testimony to all men. Each candle is to be lit right after sundown. As this world becomes darker, so we should be light in the world.

The Hanukkah Menorah is purposely designed to be different from the Temple Menorah. The Temple Menorah has seven lamps, symbolizing the seven days of creation. The Hanukkah Menorah has nine lamps, symbolizing the miracle of eight days, and a ninth candle called the Shamash which means “servant.” None of the eight candles are ever to be used to light any of the other eight candles. All of them are to be lit from the servant candle only. God the Father calls Yeshua “my servant, whom I have chosen.” We cannot find our light in the light of another believer. Each one of us must have our candle lit by the Light of all mankind, Yeshua Himself. He is truly the Servant and the sole source of our light.

As we come to the season of the Festival of Lights, the Feast of Hanukkah, I wonder. Do you know the Light of the world? Is your candle lit by His flame? Are you showing your light to the outside world for all to see?

Let us join together in this Feast celebrated by our Messiah, Yeshua —

The Feast of Hanukkah!