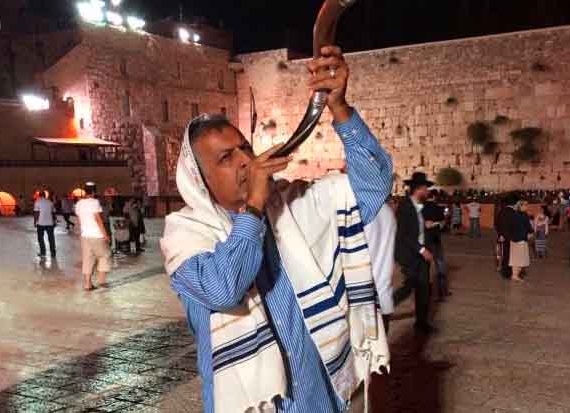 THE CALL OF THE SHOFAR

As my brothers and sisters in the flesh, the Children of Israel are fighting the evil enemy; many are looking for spiritual signs and wonders. Many of the young soldiers and commanders come from a religious background, praying to Adonai during the battle. They do not know The Lord Yeshua Ha’Mashiach, and they are afraid of Him instead of trusting Him to save them.

One such commander, Colonel Ofer Winter, had quoted the words of King David to his soldiers in a letter before going to battle.

Then David said to the Philistine, “You come to me with a sword, with a spear, and with a javelin. But I come to you in the name of Adonai Tz’vaot, the God of the armies of Israel, whom you have defied. (Shmu’el Alef [1 Samuel] 17:45)

Unfortunately Colonel Winter was criticized by the leftist media, but the young soldiers and officers understood what he said and prayed to Adonai.  One such young officer was Lt. Hadar Goldin, who got engaged just two weeks, but lost his life just before Shabbat.

Adonai has called me, Rabbi Amnon Ben Yehuda, from the family of King David, to sound the Shofar in Israel, just as He had commanded Ezekiel.

But if the watchman sees the sword coming and does not blow the Shofar, and the people are not warned, and the sword comes and takes any person from among them, he is taken away in his iniquity; but his blood I will require at the watchman’s hand. (Yechezk’el [Ezekiel] 33:6)

As it was in the time of Moses, the Chosen People had heard the Shofar, and they also witnessed the awesome sounds of Adonai’s Presence.

Now all the people witnessed the thunderings, the lightning flashes, the sound of the Shofar, and the mountain smoking; and when the people saw it, they trembled and stood afar off.  Then they said to Moses, “You speak with us, and we will hear; but let not God speak with us, lest we die.” And Moses said to the people, “Do not fear; for God has come to test you, and that His fear may be before you, so that you may not sin.” So the people stood afar off, but Moses drew near the thick darkness where God was. (Sh’mot [Exodus] 20:18-21)

Now, the Israeli soldiers and citizens hear the sounds of rockets and mortars coming from Gaza, the land of the Philistines.  They also need to hear the sounds of the Shofar, and the voice of Adonai Yeshua, and to understand that this is a spiritual warfare.

The Shofar is also the instrument to call 144,000 Jewish men with Adonai’s Shofar to be commissioned around the world to announce the King of Shalom is about to descend in Jerusalem with His shofars.

What a global wake-up call:

In a moment, in the twinkling of an eye, at the last Shofar. For the Shofar will sound, and the dead will be raised incorruptible, and we shall be changed. (1 Corinthians 15:52)

For Yeshua Himself will descend from heaven with a shout, with the voice of an archangel, and with the Shofar of God. And the dead in Messiah will rise first. Then we who are alive and remain shall be caught up together with them in the clouds to meet the Lord in the air. And thus we shall always be with the Lord. Therefore comfort one another with these words. (1 Thessalonians 4:16-18)

Some trust in chariots, and some in horses; but we will remember the name of the Lord our God. They have bowed down and fallen; but we have risen and stand upright. Save, Lord! May the King answer us when we call. (Tehillim [Psalms) 20:7-9)

The Chosen People must hear that Yeshua is The Messiah.

With my personal shofar and the strength of Adonai, I will go and tell them, while you are praying for me.

Since we are getting closer to the date of Yeshua’s return to Jerusalem, my traveling dates to the battle field will be on August 17-27.

Please pray and consider your financial support for this urgent and important trip:

You can donate directly online at www.betshalomfresno.org